It wasn’t an easy decision. I have two precious daughters that depend on me to provide for them. The decision was painful. SERIOUSLY!

What’s that stat about new businesses? 9 out of 10 fail or something along those lines.

I crunched the numbers and figured out the amount of revenue I needed to survive. To eat.

Step by step I eliminated as much waste as I could to get my expenses as low as possible. Little did I know I was well on my way to adopting minimalism as a way of life.

Then it became pretty obvious that I may chicken out and not quit. I had a decent job. Why would anyone leave that certainty and consistent pay? Maybe I was crazy after all. Maybe the rumors were true. 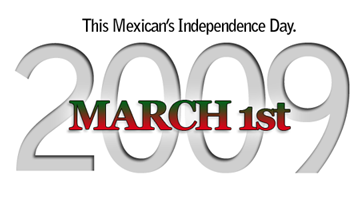 I hate to look bad and not follow through on my commitments. So, on this very website I had a graphic with a timer that was counting down to March 1, 2009.

Then I took it a step further. I emailed everyone I knew and told them about my decision to quit the job I have had for almost 20 years.

Some people were calling my bluff. Calling it BS.

Their doubt gave me even more motivation. I know, I know… I’m a strange bird. The truth is that I would have likely chickened out if not for that motivation. That is why I put up the countdown after all.